Have a Wonderful Christmas!

“For to us a child is born, to us a son is given, and the government will be on his shoulders. And he will be called Wonderful Counselor, Mighty God, Everlasting Father, Prince of Peace”
(Isaiah 9:6 NIV)

HAVE A BLESSED AND MEANINGFUL CHRISTMAS
AND A HAPPY NEW YEAR
TO EVERYONE. 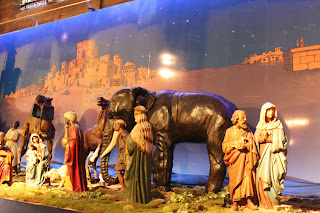 taken inside the Cathedral of Strasbourg, France last Dec. 2010. We visited the Christmas market in this city.
Posted by Admin at 9:47 AM No comments:

The Spice Girls in action again!! confused where to look because there were four cameras on the go!!


some of the fresh fruits being served


banquet of food!! yummy!! yummy!! some were served in the kitchen because the table was already full!

Posted by Euroangel at 10:47 PM No comments:

The glitter stars for sale at Nuremberg Christmas market
copyright photo by: Euroangel

Posted by Euroangel at 11:18 AM No comments:

The Last Candle of Advent

I finally lighted the last candle of advent today. Christmas is on our way! may you have a great one in this Yuletide season!! Again and again, I want to greet each and everyone a very Merry Christmas and a More Bountiful New Years!! Cheers!!
Posted by Euroangel at 9:09 PM 1 comment:

Nobody can stop it anymore!
The great celebration of all times
is almost coming!! This is the reason why
I want to greet you in advance a

and a Prosperous New year!!

Enjoy The Holidays!!
Posted by Euroangel at 4:25 PM No comments:

Hi to all! It is the third Sunday of Advent already. Advent is celebrated by Christians who prepare for the coming of the Birth of Jesus. It is derived from Latin word adventus which simply means "coming ". It is also the time or period before the coming of Christmas. This morning I already lit the third candle in our advent wreath while taking my breakfast. I am alone this weekend since my husband have to go to work.

Some more days and Christmas is almost coming. I hope you will have a memorable and joyous one!!

Here is an example of advent wreath. I wish you an enjoyable Sunday!!
Posted by Euroangel at 2:31 PM No comments:

Posted by Euroangel at 9:47 PM No comments:

I would like to extend my warmest greetings to each and everyone!!
Merry Christmas and a Happy New Year!!
Got this cute graphic from my former classmate and friend Aileen in friendster.
Thanks Leen for the greetings..wish you the same!!

Posted by Euroangel at 7:54 PM No comments:

Advent (from the Latin word adventus, meaning "coming") is a season of the Christian church, the period of expectant waiting and preparation for the celebration of the Nativity of Jesus, in other words, the period immediately before Christmas. It is the beginning of the Western Christian year and commences on Advent Sunday. The Eastern churches begin the liturgical year on 1 September.[1] The Eastern Christian equivalent of Advent is called the Nativity Fast but it differs both in length and observances.

The progression of the season may be marked with an Advent calendar, a practice introduced by German Lutherans. At least in the Roman Catholic calendar, Advent starts on the fourth Sunday before December 25; in other words, the Sunday between November 27 and December 3 inclusive.

Latin adventus is the translation of the Greek word parousia, commonly used in reference to the Second Coming. Christians believe that the season of Advent serves a dual reminder of the original waiting that was done by the Hebrews for the birth of their Messiah as well as the waiting that Christians today endure as they await the second coming of Christ.