What a such dark sky in London as we visited Westminster Abbey. This Gothic church is also known as The Collegiate Church of St Peter at Westminster.

Here is an image I took during my visit last 2008. 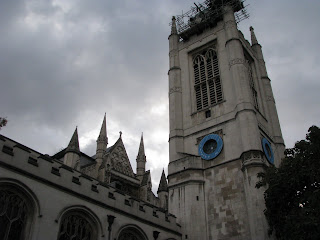 According to a tradition first reported by Sulcard in about 1080, the Abbey was first founded in the time of Mellitus (d. 624), Bishop of London, on the present site, then known as Thorn Ey (Thorn Island); based on a late "tradition" that a fisherman called "Aldrich" on the River Thames saw a vision of Saint Peter near the site. This seems to be quoted to justify the gifts of salmon from Thames fishermen that the Abbey received in later years. The proven origins are that in the 960s or early 970s, Saint Dunstan, assisted by King Edgar, installed a community of Benedictine monks here. A stone abbey was built around 1045–1050 by King Edward the Confessor as part of his palace there and was consecrated on 28 December 1065, only a week before the Confessor's death and subsequent funeral and burial. It was the site of the last coronation prior to the Norman conquest of England, that of his successor Harold II. From 1245 it was rebuilt by Henry III who had selected the site for his burial. http://en.wikipedia.org/wiki/Westminster_Abbey

Another weekend is here! I got here a picture of somewhat like a religious monument. I took this picture during a visit with a dear friend Dae Loloy in Manchester last Nov. 2008. I can't exactly remember where I took this one. I bought a book about Manchester but it was left in Birmingham. Just sharing this picture for now. Have a great and blessed weekend to all.

Click the logo to join and see Scenic Sunday photos around the world! Thanks to The Holley Herald for hosting this beautiful meme! Have a great day to all!