Filipino abstract painter, Chiqui Rodriguez announces her major new series entitled SUDDEN FLIGHT, her solo show to be held in Zurich by late summer will have its preview opening in a two-man show at the Picasso Boutique Serviced Residences, hosted by Altromondo Gallery on 22 May 2014 and continuing through 18 July 2014.

The 15 selected paintings from a total of over 100 works that comprise the SUDDEN FLIGHT series, awash in vibrant color, are sure to dazzle visitors to the Picasso Boutique Serviced Residences. Chiqui’s unique approach to blending acrylic pigments on canvas creates gem-like surfaces. Peering through the surface to what is depicted below, the viewer realizes that all is not as glowing as it first appears. Chiqui is noted for her deep abstraction of complex realism.

Chiqui also explores a complex subject; her work calls attention to our culture’s thought of hardwork. Much of Chiqui’s artwork is influenced by her experience in the corporate world. Through this new body of work, she connects hardwork to social class as a form of meditation.

Says Chiqui of her SUDDEN FLIGHT series, “I was inspired by my short trip to Brussels after a show held in Berlin in 2013. I arrived with the intent of finding an artist who would be willing to collaborate with me in my upcoming projects, so I started to look around. Instead of finding an artist, I found some Filipinos who work around the city. My interaction with them in a different environment led to varied conversations about how challenging life is to be away from their love ones but nevertheless find solace knowing that their families benefit from their sacrifice. I started on my e-sketchpad and started to express my thoughts after this encounter. The title 'Sudden Flight' refers to several layers of meaning: sudden burst of happiness, excitement as reaching out lives of far-flung Filipinos extending compassion, a moment of bliss.”

The very beautiful fresco or painting on the ceiling of St. Vitus Church in Burglengenfeld, Germany 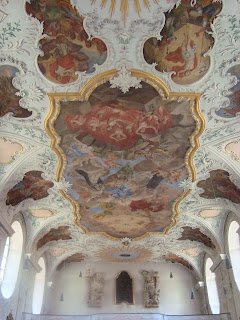 Posted by Euroangel at 11:17 PM No comments:

Louvre has different Wings and Galleries. This photo was taken at Denon Gallery inside Louvre Museum in Paris.. Louvre it is a very huge museum!! photo taken by Ruby Benz

Posted by Euroangel at 10:44 PM No comments:

Yesterday was already the third time I visited the Altstadt or Old City in Munich. But yesterday was the first time I entered this very beautiful Church there. I was amazed seeing the beautiful frescos on the ceiling. Really very beautiful!! Its always include in My daily Nourishment seeing incredible and amazing architecture like this..I truly admire its creator!! have a great day to all!!
Posted by Euroangel at 6:30 PM No comments: