The Cathedral in Bamberg, Germany

The Bamberg Cathedral of St. Peter and St. George (Bamberger Dom St. Peter und St. Georg) is known to be one of the famous architectural monuments in Germany. It is also the most famous landmark of the city of Bamberg, Bavaria, Germany. Emperor Henry II is the founder of the cathedral in 1004. It has a late Romanesque design with four imposing towers.

The Church of St. Mary The Virgin in Knaresborough, England

I got here another religious and historical architecture, the church of St. Mary The Virgin in Knaresborough, England. I visited this church last year in November. It is said that this church is around 700 years old now. Here is the photo I personally took during my visit with a friend Ross in this interesting place.

Click the logo to join and see Scenic Sunday photos around the world! Thanks to The Holley Herald for hosting this beautiful meme! Have a great day to all!

I am always fascinated by the architecture of the old but historical and magnificent Churches and Cathedrals in Europe. Every time I see all the engineering, arts and paintings especially in the inside part of these buildings, I always wanted to pay respect to those who built it..The Cathedral in the city of Eichstaett in Bavaria, Germany is an amazing one. Feel free to click the picture to enlarge..Have a great evening to all!

Posted by Euroangel at 7:47 PM No comments:

St. Peter's Cathedral is considered to be one of the landmark of Regensburg, Germany. We had a visit there today and it was a great one. I was amazed by the architecture of this very old and historical Church..please read below for more some information about it.

The Regensburg Cathedral is the bishop's church and the principal church of the Regensburg diocese. It is also the home of the Regensburger Domspatzen ("cathedral sparrows"), a choir rich in tradition. The structure is considered the most significant Gothic work in southern Germany.

The Cathedral is also the burial place of important bishops, including Johann Michael von Sailer (1829-1832, memorial built by Konrad Eberhard in the south chancel), Georg Michael Wittmann (1832-1833, memorial also by Konrad Eberhard in the north chancel), and Archbishop Michael Buchberger (1927-1961, likewise in the north chancel). In the western part of the central nave stands a bronze memorial for the Prince-Bishop Cardinal Philipp Wilhelm (d. 1598), the brother of Duke Maximilian I of Bavaria.
Posted by Euroangel at 11:14 PM No comments:

This is always amazing! I mean I always admire the arts and paintings that I always see on the frescos of the historical churches in Germany. The one I saw in St. Michael Church in Kallmuenz is also a very great one. Click the image to enlarge and have a happy wordless Wednesday! 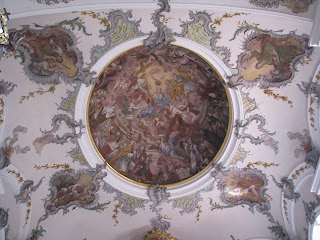 Posted by Euroangel at 7:54 PM No comments:

Louvre has different Wings and Galleries. This photo was taken at Denon Gallery inside Louvre Museum in Paris.. Louvre it is a very huge museum!! photo taken by Ruby Benz

Posted by Euroangel at 10:44 PM No comments: